Busby was involved in a road traffic accident, which caused a severe injury to the left fore leg. This necessitated immediate attention and a local Veterinary Hospital Surgical Referral Centre was attended within a short period of the accident. The initial presentation was of a non complicated wound penetrating the full depth of the dermis of the medial aspect of the left forelimb, extending from the proximal metacarpus to the axilla.

While it was recognized that the size of the wound might lead to complications, but because the wound appeared to be clean, the initial prognosis was positive for an uneventful recovery. Busby was anesthetized and the wound was debrided. Sutures were not placed in the wound as an assessment was made that the wound was too wide for sutures to pull the opposing sides together giving no possibility of apposition. It was decided to let the wound heal by second intention initially and then reassess.

X-rays were taken of the leg while the patient was under general anaesthesia and a suspected fracture or chip off one of the metacarpals was found. The wound was bandaged in part to provide support for this area. Topical antibiotics (fusidic acid, Fucidin® Leo Human) were applied to the lesion to provide antibiotic cover locally and the patient was sent home on systemic antibiotic cover Norodine 80 White, circular, uncoated antibacterial tablets scored on one side. Each tablet contains: Trimethoprim Ph.Eur 80 mg Sulphadiazine Ph.Eur 400 mg manufacturer Norbrook Laboratories Ltd at the recommended daily dose of one tablet per 16 kg bodyweight given orally, providing 30 mg of combined active ingredients per kg bodyweight. In addition to this analgesic and anti-inflammatory cover was provided in the form of Rimadyl® (Carprofen) at the recommended daily dose 2 to 4 mg carprofen/kg bodyweight/day. The owner was instructed to bring Busby back after one week.

Busby was presented to my clinic as an out of hour’s patient, just three days after his original treatment, as the owner was concerned about the worsening odour from the bandaged leg. He had contacted the original veterinary referral centre for permission to attend us as he had been a patient with us previously. Although bright at the time of presentation, Busby’s bandage was emitting a foetid odour and with evidence of pain as the bandage was gently removed. The lower limb unexpectedly was not painful for the patient and the finding of some grit in the very thick coat that Busby being a bichon frise had indicated that the suspected damage to the lower digits on x-ray was in fact an artefact from the material left in the thick coat from the ground during the accident. Based on the initial description and the owner’s observation, no healing appeared to have taken place, and the purulent discharge matted the hair beyond the border of the wound.

At this point the owner was not keen to have a second anaesthetic given so soon after the first, so the wound was cleaned with a surgical scrub Hibiscrub diluted in body temperature water and then washed with povidone iodine surgical scrub removing any matter that was stuck in the hair close to the wound. On the possibility of an anaerobic infection Metronidazole 200mg was given at a dose rate of 100mg/day for systemic cover and a second antibiotic Synulox ® (200 mg amoxicillin and 50 mg clavulanic acid) was given at a dose rate of half a tablet twice daily and the wound was to be left open and if possible washed in a saturated salt water. The wound was left open in case an anaerobic infection was present and so that the owner could assess the state of the wound with instructions to ring the practice daily and to bring Busby back in 7 days.

Busby was brought back ahead of schedule as the wound was still smelling badly and appeared non responsive to the changed antibiotic therapy and saline washes. The on duty veterinary surgeon changed the antibiotics to Antirobe ® Clindamycin 50mg 1 capsule twice daily and instructed the wound be cleaned with the Homeopathic Mother tincture Calendula twice daily at a dilution of 20 drops of mother tincture add to 100ml of pre-boiled and cooled water.

Busby was brought back and the antibiotic cover with Clindamycin and Calendula washes continued despite the odour remaining and Busby was booked back in for debridement, bathing and clipping of the hair around the wound and possible tension suturing to reduce the wound size to be done on the 27th of July.

Busby’s leg was photographed prior to his general anaesthesia to show the exact condition of the leg 14 days after the initial injury and following several different courses of treatment with antibiotics and various washes. 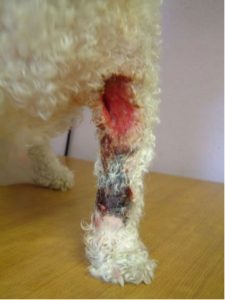 It was decided at this point to abandon systemic antibiotic therapy to treat the wound entirely with the application of a trial batch of HP Healing Cream formulation, which we had already found very effective in similar wound conditions. Busby was anaesthetised using ACP2mg/ml as a premed .05ml IM, Thiopentone 2.5% IV as a knockdown anaesthetic and maintained on Isoflourane. A swab was taken for culture at this point despite antibiotic therapy, as it was hoped that it might give some indication of a suitable treatment. The area around the wound was clipped and tension sutures placed in the wound which failed to provide reasonable apposition but did reduce some of the wound size. The wound was once again washed with Hibiscrub Surgical Wash, followed by povodine Iodine surgical scrub and then rinsed with saline and then bathed in sterile water with Homeopathic Mother tincture of Calendula (Marigold) at a dilution of 20 drops of mother tincture add to 100ml of sterile water. The wound was then allowed to dry fully and HP Healing Cream liberally applied. In addition Fucithalmic eye ointment was applied to provide antibiotic cover to the area although the use of Fucidin Cream Leo (Human) had failed to act it was deemed wise to use antibiotic cover as the cream was a non conventional therapeutic, despite the fact that I had seen it work in previous cases.

20 days after the initial injury and just 7 days after starting treatment with HP Healing Cream the healing results were amazing the odour was completely gone the skin and wound showed a dramatic healing even in the area where the skin was black and hard it had gone soft and pink. Within two days of starting the cream the owner had noticed a distinct improvement and the swab taken was never sent for bacteriology. In the photograph a small portion of the open upper wound is hidden, but one can still see the bulk of the wound. The owner had abandoned the Fucithalmic after 4 days seeing the improvement and knowing he had used it previously without success. One point is evident that HP Healing Cream worked both in conjunction with the antibiotic Fucidin and on it own without the antibiotic showing it compatibility with conventional therapeutics something I have now see in quite a number of cases. 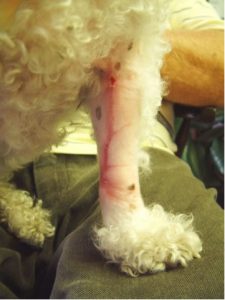 The above photograph was taken just over three weeks from the first photograph in the series and the wound is fully closed, clean with hair re-growth. The only treatment during this period was HP Healing Cream which was initially applied two to three times daily as the owner could manage and then reduced to daily as the wound closed and then to every few days in the latter stages to conserve cream it was applied on the basis that only what came in contact with the skin worked (there was no evidence of this other than previous cases we had treated, which showed that once the wound had closed light application was all that was required to continue healing, but in the initial phase liberal application appeared to help)

Busby’s owner Graham Gosling consented to the use of Busby’s case record, so that other patients could benefit in the way that Busby had. So impressed by the result of the treatment was Graham that he not only consented to the use of the initial case records, but he brought Busby back for follow up photographs for an entire year with no form of recompense. One of Graham’s more interesting comments was on how well Busby tolerated the creams application to such a large open and obviously tender wound as the initial bandaging and un-bandaging had obviously been so painful. Busby has returned to completely normal activity and unless one knew there had been a problem no one would know that Busby had ever been injured 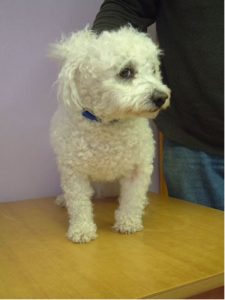 Busby has hardly a mark visible. He walks and plays normally and has healed completely with no side effect from the treatment what so ever. The author would like to thank Homeopet for the provision of the HP Healing Cream used in this case.