Skip to content
HomeoPet LLC is a family owned business with its origins rooted deep in the wilds of the South West of Ireland. Well, maybe not the wilds, but our co-founder – Tom Farrington MRCVS., MVB., VetMFHom – has been practicing veterinary medicine in Ireland for over 35 years and it is through his veterinary practice now based in West Cork that his passion for homeopathy and natural pet care developed in to a full time holistic practice. From here Tom successfully treats both Pets and People, not to mention horses and farm animals,  developing further the seeds of HomeoPet that were sewn originally in his former practice based in Dublin. Ireland could have one of the longest traditions of formal dog breeding in the world, but did you know that there are actually nine breeds of Native Dogs of Ireland? As it’s St. Patrick’s Day (or the Feast of Saint Patrick) we decided to celebrate our Irish heritage and combine this with our love of dogs, so read on for more information on these fabulous Irish canines.

Generally accepted to be the oldest Irish breed of dog, the Irish Wolfhound has been recorded for centuries in mythology as well as official records. They were already established in Ireland by the 1st century AD at the time when the mythological Irish hero Setanta earned the name ‘Cú Chulainn’ (‘hound of Culann’) after killing Culann’s Irish Wolfhound in self-defence. These majestic dogs are the tallest Irish breed (and indeed are the tallest breed in the world), with the average male reaching 32-34 inches in height. With long legs, a deep chest and muscular body, Irish Wolfhounds are extremely fast, exceptionally intelligent and hunt by sight. The dog’s name originates from its purpose of hunting wolves rather than its appearance and they are often known as the ‘Big Dogs of Ireland’. The Irish Wolfhound has a rough, wiry coat of hair which is well suited to the oft’ times damp and windy Irish climate and although they are most commonly a grey and brindle colour, they can also be white, fawn, black, or even red brindle. Due to their size and stature, Irish Wolf hounds are not suited to every home, but if you have the space, the time and energy they are full of character and make extremely good guard dogs! 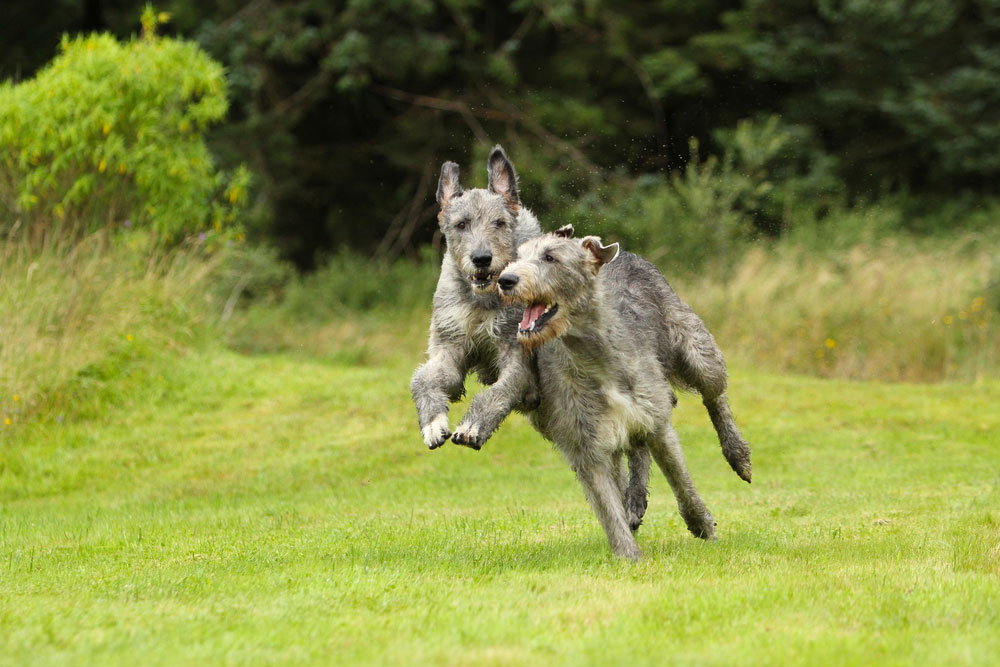 The Irish Setter (sometimes aptly known as the ‘Red Setter’) was originally bred from the Irish Red and White Setter and a pure red coloured dog of unknown breed towards the end of the 19th Century and was developed as a game hunting dog. This tough, energetic breed has an athletic build, an excellent working ability and great endurance. With a deep red-chestnut coloured coat, they are extremely handsome dogs but require plenty of activity to satisfy their natural instincts as a game hunter. They make a very loyal companion and are sometimes used as a ‘therapy dogs’ in schools and hospitals – there really is no better therapy than stroking the head and beautiful soft ears of one of these stunning dogs. 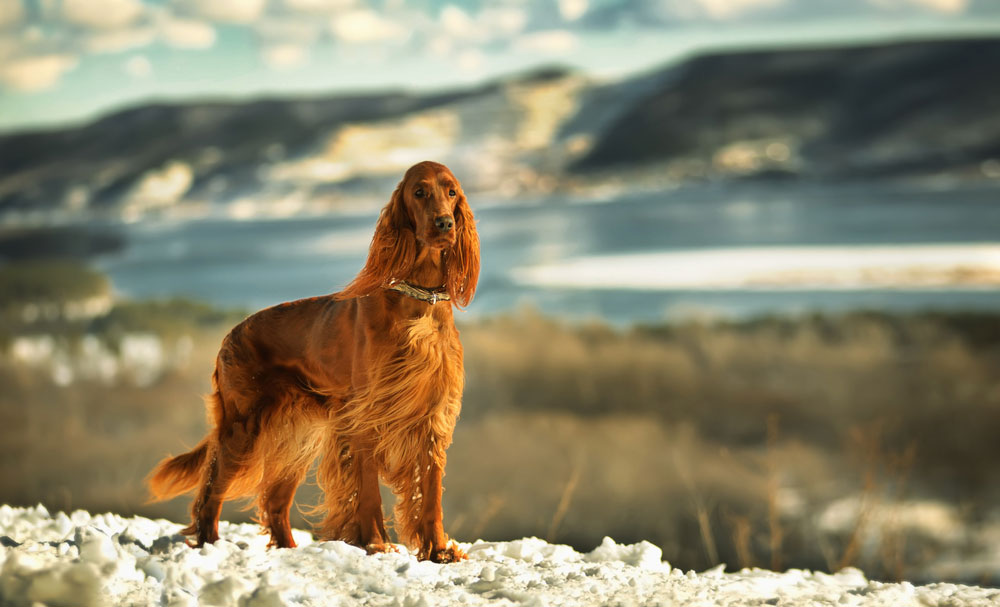 Thought to have emerged in Ireland towards the end of the 17th Century, the Irish Red and White Setter came close to extinction towards the end of the 19th century when breeding the pure red variety became more fashionable. However, during the 1920s efforts were made to revive the breed and by 1944 the breed had re-established itself well enough to have a club of its own, and today it can be seen in healthy numbers at Irish shows and Field Trials. This sporting dog is distinguished by its long silky white coat with deep red markings. The Irish Red and White Setter is an extremely intelligent breed, makes a loyal, dependable companion and gun dog, but its affectionate temperament also means it thrives in an active family environment. 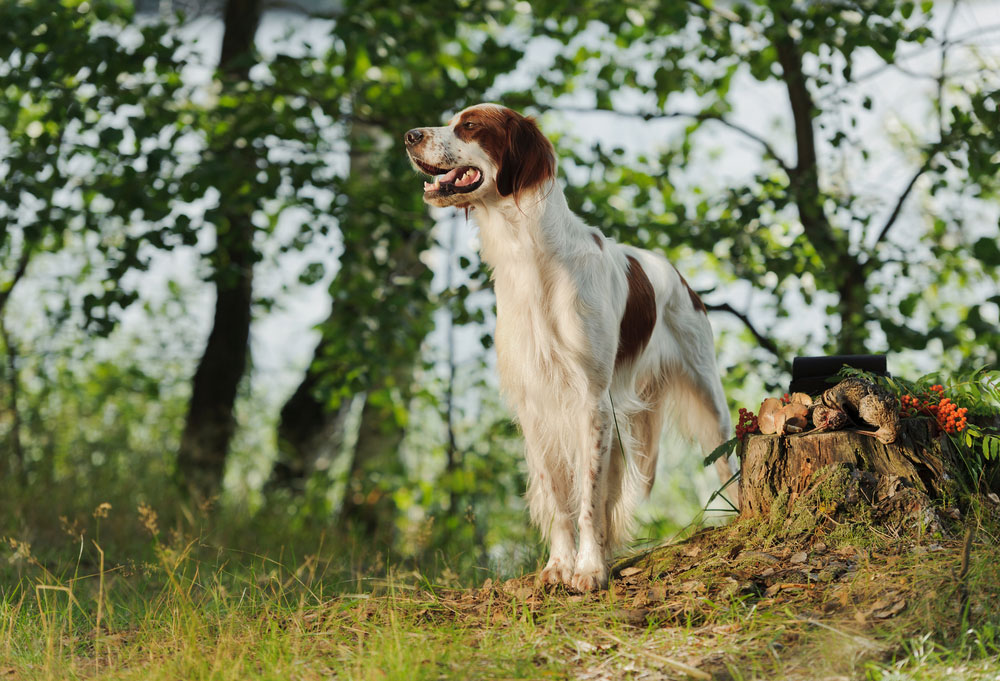 This strong, sturdy terrier has its origins in the rugged terrain of the Glen of Imaal in the Wicklow Mountains. Like its relations the Kerry Blue Terrier, Soft Coated Wheaten Terrier, and the Irish Terrier, the Irish Glen of Imaal Terrier is a hardy, working dog that was bred to hunt foxes, badgers, and vermin off the farm. Although it is the smallest of the Irish breeds, its long back and highly developed muscular stature means it is often referred to as the ‘big dog on short legs’ and it is often said that ‘a Glen will rarely start a fight but is likely to finish it’!

With a gorgeous silky coat of warm wheaten hair, the Irish Soft Coated Wheaten Terrier is aptly named and is thought to have been in existence for at least 200 years. Like its terrier cousins – the Irish Terrier and the Kerry Blue Terrier – the Irish Soft Coated Wheaten Terrier was traditionally the companion of the common man and was widely bred as a farm dog, playing a crucial role in herding livestock, hunting vermin from the farm, and guarding against intruders. The breed has grown steadily in popularity over recent years and is now well known world-wide and makes for a great companion dog. 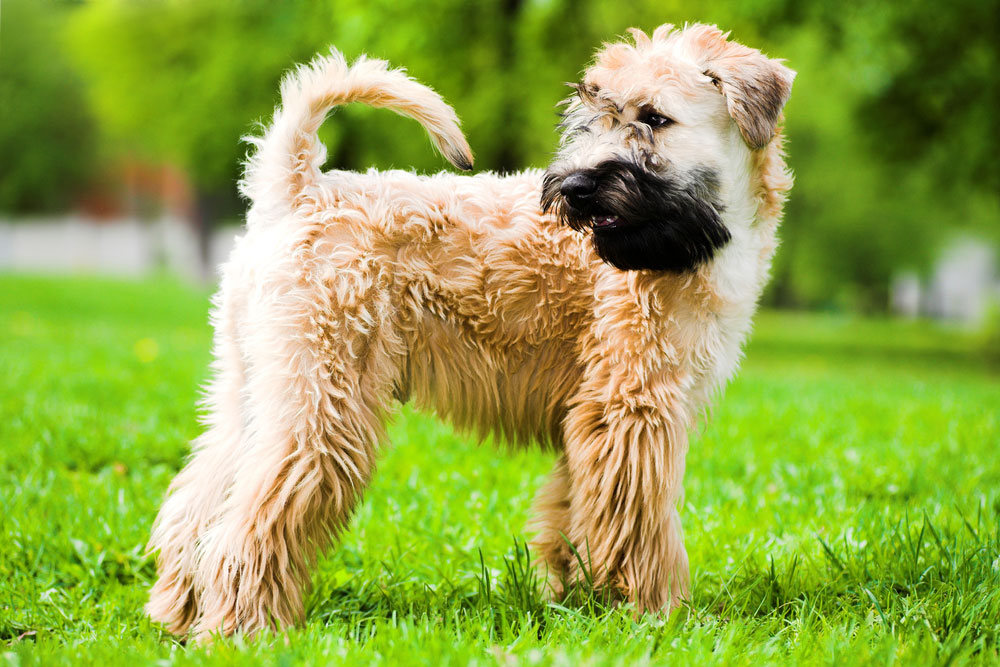 One of the oldest Irish hound breeds, the Kerry Beagle is commonly believed to be a descendant of the ‘Old Southern Hound’ or ‘Celtic Hounds’ going back probably to the time of the first Celtic settlements in Ireland. A large, fine-looking dog, the Kerry Beagle is an extremely efficient, instinctive hunter and packs are still used in Ireland today for hunting. Known for its speed and endurance, Kerry Beagles are most commonly black and tan in colour, but can also be tan and white, or blue mottled and tan.

Like the other Irish Terrier breeds it is assumed that the Kerry Blue has been in Ireland for centuries, but, once again, because of its humble origins as a rat catcher and all-round farm dog, there are few, if any references to the breed before the 20th century. During the early part of the 20th century, the Kerry Blue became symbolic of Ireland’s Celtic past and quickly became popular as a sort of mascot for Irish patriots – Irish revolutionary leader Michael Collins had a Kerry Blue named ‘Convict 224’! Named for its soft, wavy coat of blue-shaded hair, the Kerry Blue makes a gentle, friendly and loyal companion and its reputation as an excellent working and companion dog has earned it a breed assessment in some circles of as “well-nigh perfect”. 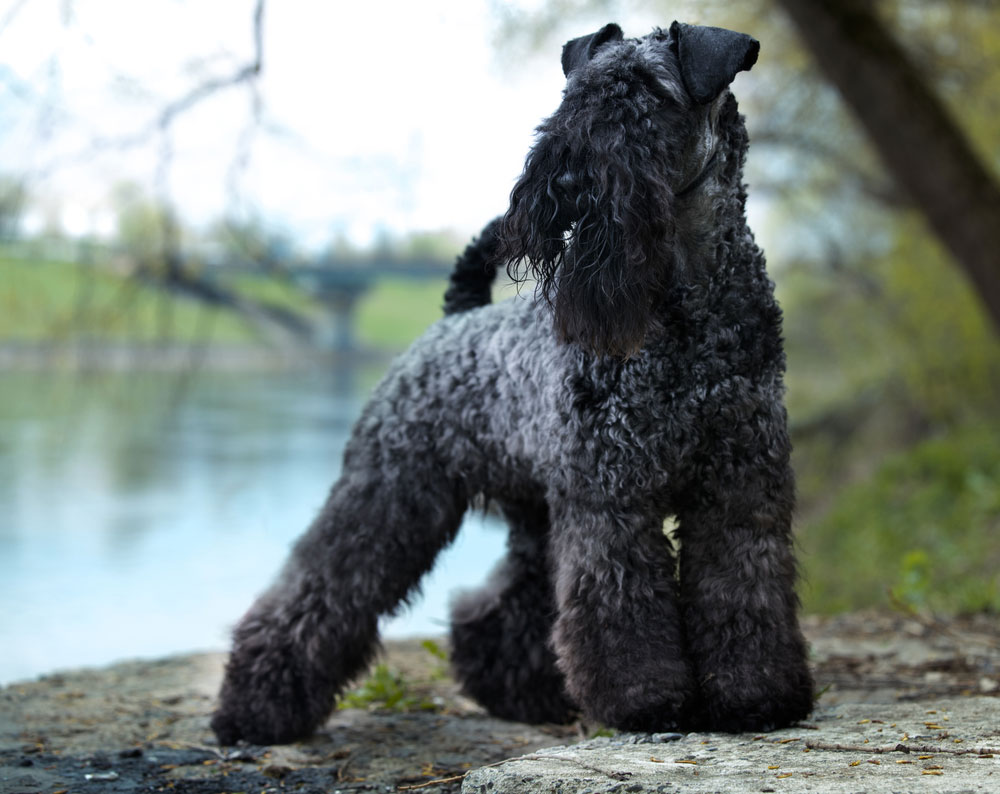 Believed to be the oldest of the terrier breeds, there have been references to the Irish Terrier in manuscripts that are centuries old. Before the 1880s Irish Terriers were their now well-known red colour, but they were also black and tan and sometimes brindle. At the end of the 19th century efforts were made to breed out the black and tan and the brindles so that by the 20th century all Irish Terriers showed the red coat. The red coated Irish Terrier soon made its appearance on show benches in England and in the United States where it fast gained popularity. A useful farm dog and, like the other Irish terries, bred for its hunting and working ability, the main characteristics of the Irish Terrier are endurance, speed, bravery and loyalty. Just the characteristics you might be looking for in your new best friend. 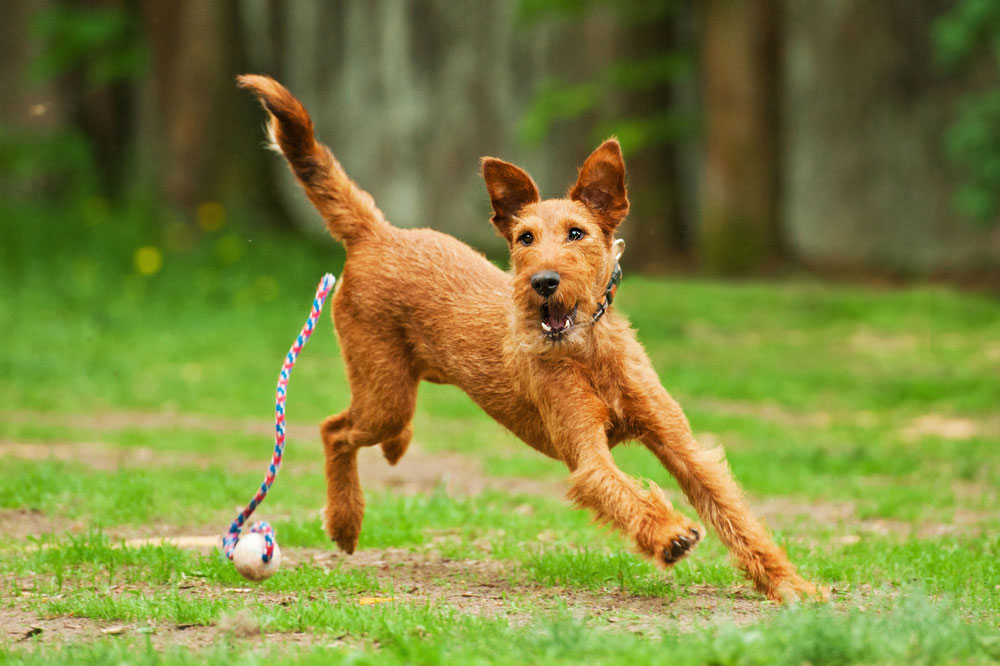 The Irish Water Spaniel has a long history dating to 1600 and it is thought that the breed originated in Persia and came to Ireland via Spain. A natural water dog, the stout, strong Irish Water Spaniel is the dog of choice of the wildfowl hunter, but this smart, loyal breed can be adapted for most forms of shooting and will also point and retrieve. Sometimes known as the ‘clown’ of the spaniels, probably due to its topknot of long curly hair between its eyes and the humorous behaviour it sometimes displays when working! With a dense coat of tightly curled hair, typically a rich liver colour with a purple hue, the most peculiar feature of the Irish Water Spaniel is its ‘rat tail’, which has given rise to the names ‘Whip-Tail Spaniel’ or ‘Rat-Tail Spaniel’. But we won’t hold that against these beautiful dogs!