Diabetes…we’ve all heard of it. You may even know someone who suffers from it? In the United States alone, 29.1 million people are living with diagnosed or undiagnosed diabetes, while in the UK, 3.8 million people now have this potentially life-threatening disease. And it’s on the increase. However, it’s not only us humans that can suffer – our pets can too. And they are…in increasing numbers.  It is estimated that 1 out of every 100 dogs that reaches 12 years of age will develop diabetes, while diabetes could affect up to 1 in 230 cats and may be becoming increasingly common. November is Pet Diabetes Month and in this post, Tom Farrington MVB MRCVS VetMFHom – Chief Veterinary Medical Advisor for HomeoPet – discusses Diabetes in pets – what it is, its symptoms and how we can help prevent it.

Diabetes (correctly termed diabetes mellitus) occurs when your dog or cat has stopped producing insulin, has inadequate levels of insulin, or has an abnormal response to insulin. Insulin is a hormone that keeps the body’s glucose concentration at a normal level while delivering glucose (energy) to the body’s cells.

There is a second form of diabetes – diabetes insipidus, which occurs when the kidneys are unable to regulate fluids in the body, and large amounts of dilute urine are produced. However, this condition is far less common than diabetes mellitus and is in fact completely unrelated to diabetes mellitus. In dogs and cats, diabetes mellitus is more common in middle-aged to older animals, especially those that are overweight (seeing a pattern with us humans?).

There is also evidence that some breeds are genetically predisposed, and this could be a causal factor in younger animals developing diabetes. Among our canine friends, Toy Poodles, Terriers, Cocker Spaniels, Dachshunds, Doberman Pinschers, German Shepherds, Labrador Retrievers, and Golden Retrievers experience above-average rates of diabetes, while in cats, certain breeds, such as Siamese cats, also experience an above-average rate of the disease. 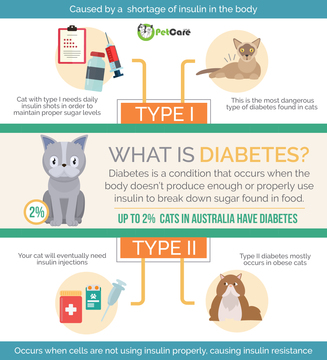 Symptoms of diabetes in pets

The symptoms and the complications associated with diabetes mellitus are similar to those that affect humans and a dog or cat suffering from diabetes could display any combination of the following symptoms:

Prevention is better than cure…

The most notable factor in diabetes is high blood sugar, which is evident even in the pre-diabetic stage of the disease. Many factors affect blood sugar, such as diet, hormonal changes, exercise and obesity and as a result, prevention (and management if your pet is unfortunate enough to develop diabetes) primarily comes down to two factors: diet and exercise.

Diabetes often occurs amongst overweight or obese animals, when excess fat leads to insulin resistance, so to give your pet the best chance of avoiding diabetes, make sure he or she gets plenty of exercise. Daily walks will be good for both you and your dog and for cats, you can encourage plenty of active time through interactive play, electronic cat toys, introducing vertical territory to your home and even leash walking.

Be aware of hidden sugars in all food. Unfortunately, this is easier said than done! However, by developing an understanding of what goes into your pet’s food, you can learn how to make healthier choices on his or her behalf. See our previous post on raw food diets for more insights into hidden sugars and how to avoid them.

For example, many dogs are fed carrots and similar ‘healthy’ veg as treats in the mistaken belief that they are low in carbohydrate. Unfortunately, modern carrots are bred to be sweet as that’s what human taste buds like! The ‘original’ carrot was bitter and purplish, but so successful has our manipulation been that it’s possible to measure a significant blood sugar increase in pets after eating just one ‘modern’ carrot.  The same goes for swede, turnip, peas and parsnip, so these vegetables are best avoided in your pet’s diet.

One of the reasons I suggest green veg, in particular broccoli, kale and green beans, is that they provide plenty of Calcium, Magnesium, Zinc and B Vitamins (Brewers yeast has the additional advantage of having chromium), which all help to balance the acidifying effect of high blood sugar whilst also protecting the thyroid. Y

ou should also allow periods of fasting for your pet. Intermittent fasting is now quite a trend in human health, but fasting has been recommended in many BARF (Biologically Appropriate Raw Food) Diets for pets for many years. Fasting can and should be done with any diet that you choose to feed your pet. Also ensure that your pet has free access fresh, clean water as drinking plenty of water will help wash sugar out of the bloodstream.

As obesity is often a significant associative factor in the development of diabetes, a compromised liver function often accompanies the disease. Homeopet Liver Rescue helps to remove unwanted environmental toxins from organs and can be enormously beneficial for your pet, even in the pre-diabetic stage. It is a fact that diabetes is a growing problem in the Western World due to our increasingly sedentary lifestyles and unhealthy diets and we have unfortunately let this trend affect the health of our pets. But it’s not too late.

Dietary change to a low sugar diet and increased excise (but not over exercise) will not only help prevent your pet developing diabetes, it can in many cases reverse the problem once it has occurred.  Dogs who have developed Diabetes will almost always need veterinary supervision, along with Insulin and Specialised Diets – either Commercial or Raw to balance the blood sugar. It is very important for any dog that no matter what the diet, it is balanced and suits the patient’s condition.